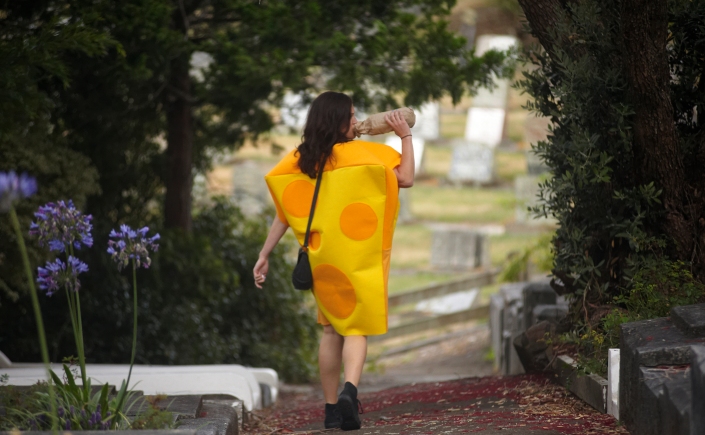 The last few months have been pretty manic for me. My friend Dan helpfully pointed out to me around New Year that I hadn’t posted a blog for ages, and ever since then, his voice in my head has been reminding me to sort it out!

Back in November I started a pretty insane run of working on films. First up, I was 2nd AD on Dwarf on a Pig, a Hobbit parody music video directed by Chris Winchester. It was a great day of shooting at Pukerua Bay, and even an unexpected 60th birthday party didn’t get in our way. You can watch it here (it is more than a little bit silly).

Soon after, I met the lovely and supremely talented Nathalie Boltt, and worked as 2nd AC on her short film Vajazzle. It was a fun shoot and the end result is equally fun – you can watch it online here!

Photo: Lynda Lester (I’m hiding at the top of frame there!)

Shortly after Vajazzle, I worked as stills photographer

on Sina Leasuasu’s Oneshot Collective film, You Can’t Be My Girl. This was another fun shoot for me – especially as some of the characters in her film also feature in my Oneshot film, Bastard. Sina’s lead actor, Adam Brown, played Paul in my short My Secret Valentine, so it was fun to catch up with him too.

Once we wrapped on You Can’t Be My Girl, it was full steam ahead with pre-production for my own short film, About Troy. We shot over three days in a variety of locations: day one we were in 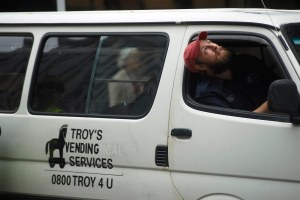 Miramar and Lyall Bay, day two was in Avalon Studios, and day three in the Wellington CBD. It was a challenging shoot – especially with the number of locations, and a large, heavy vending machine to wrangle – but we had an incredible cast and crew, so we managed to have a good time doing it.

You can read more about the shoot on our kickstarter page – and check out some other updates too. We recently recorded the voiceover for the film at Radio New Zealand, and our editor is putting together the second cut at the moment. As a director, I really enjoy the post-production process. It’s very rewarding to see the hard work of the different departments coming together into a coherent whole.

In January I worked on another couple of

Oneshot Collective films. First up, I was 2nd AC and script supervisor on The Tramp, directed by Constance Gervasi. We shot for three days, including a night spent in a private hut in the Orongorongo Valley. It was one of the hottest weekends of the summer, but we had a really awesome shoot (the woodfired hot tub and amazing food helped!)

Later in January, I was stills photographer and data wrangler on Chaz Harris’ Oneshot film Awake. Awake is a creepy little horror flick with a talented young cast and some clever props. Chaz secured a great location complete with spooky staircase.

Last month I was back into the director’s chair for Bastard, my Oneshot film. Pre-production brought the usual unpredictability and last-minute challenges, but we got through it! I really enjoyed working with a larger cast, and choreographing a fight scene was a first for me (and a lot of fun).

Our location for the shoot was the old section of

picturesque Taita Lawn Cemetery in Lower Hutt. We spent two days there, and definitely experienced four seasons in those days! From sunburn to a sudden southerly storm, we saw it all. We had a tight, ambitious schedule but we also had a small and dedicated team who made sure we got what we needed. And had a blast 🙂

At the moment, we’re getting through our first cut of Bastard before it gets put together with the other Oneshot films in the coming months.

A couple of weeks back, I ended the crazy run of shoots with Status Update, Ben Zolno’s improvised comedy-drama feature. As co-producer, I’d been involved in developing the script with Ben, along with our producer Kelly Kilgour. We had a very small crew for the six-day shoot so I also took on 1st AD and 2nd AC duties. It was a pretty intense week, but our hard work yielded some great-looking footage and I’m looking forward to seeing it come together in the edit.

Other than that, I’m fairly busy with corporate work at the moment. I’m putting together a series of explanatory videos for the Insurance & Savings Ombudsman Scheme; I spent half a day shooting with the Ombudsman, and have so far edited two of the four videos. I’m also doing some work for the Holocaust Centre, re-editing old footage of interviews with Holocaust survivors who lived in New Zealand, to be used as educational resources. The stories are truly incredible. Finally I’m working towards a corporate shoot with Helena at Holistic Vitality. We’ve been making plans and are hoping to shoot in the middle of next month.

That’s it for now – I tried to be brief, so apologies if I forgot I worked with you on something!